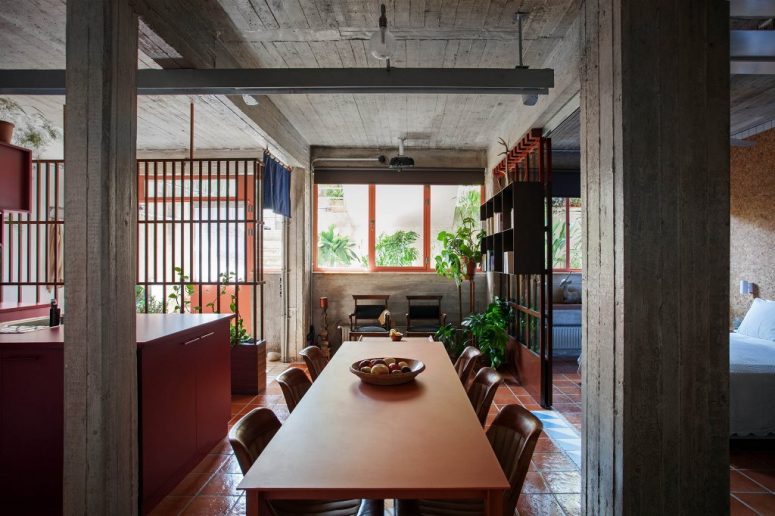 Athenian apartment buildings, modernist, multi-storey volumes known as polikatoikies which proliferated in the second half of the 20th century. Located in Ilioupoli, a non-descript neighborhood in the south-east of Athens, a formerly unfinished, semi-basement space has been transformed by Athens-based architects Point Supreme into a hip, effortlessly elegant apartment by embracing its cave-like character and unrefined state.

With only 56 square meters to contend with and daylight influx from just one side, it was critical that the practice embrace an open-plan configuration in order to establish a sense of spaciousness and maximize natural lighting. Taking advantage of its unfinished state, the architects have avoided adding internal walls, choosing instead to demarcate the various zones by using see-through, light-weight partitions such as hanging shelves, metal lattice screens and steel and glass sliding panels, as well as curtains to ensure privacy in the bedroom area.

While most architects would have been inclined to cover the unfinished raw concrete columns, beams and ceiling, the team has left them intact along with the existing steel windows and door, imbuing the space with an industrial sensibility that is further enhanced by the visible cable ducts and water piping. Despite the muted tones of the exposed building shell, the apartment is rich in textures and colors evident in the terracotta-hued polished floor tiles, cork wall covering and red-painted kitchen cabinets which imbue the space with warmth, while aquamarine and ochre curtains add additional color accents, as do lush house plants.

Rounded off with an all-baby-blue bathroom, a former small toilet that was extended to include a walk-in shower, and a roll-up projection screen that turns the modest sitting area into a screening room, the refurbishment has not only turned a drab space into a welcoming living environment, it has also imbued the apartment with chill out vibes and unpretentious sophistication. 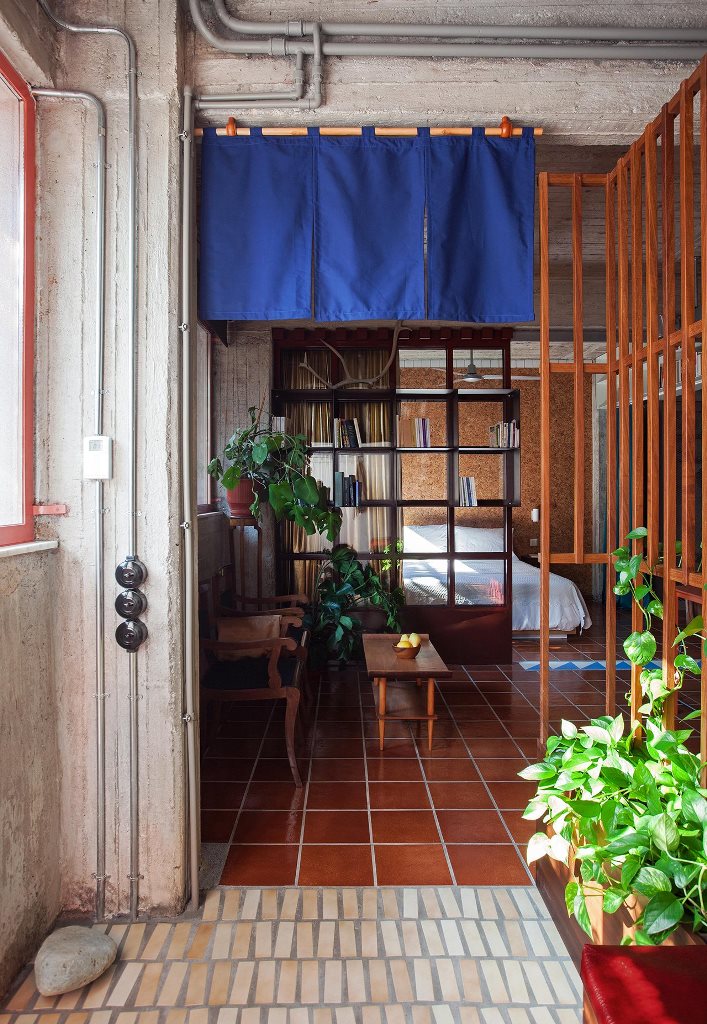 There are wooden screens, bookshelves and even fabric that work as space dividers 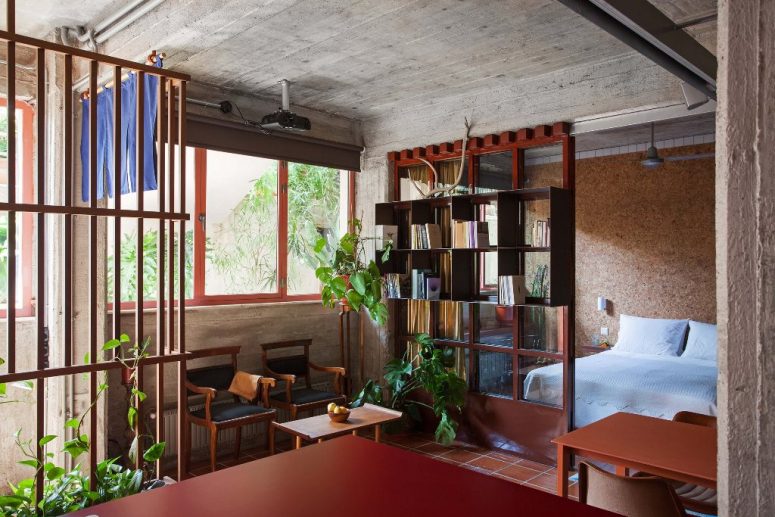 The bedroom features a MDF wall, there’s some stylish furniture in brown and reddish shades 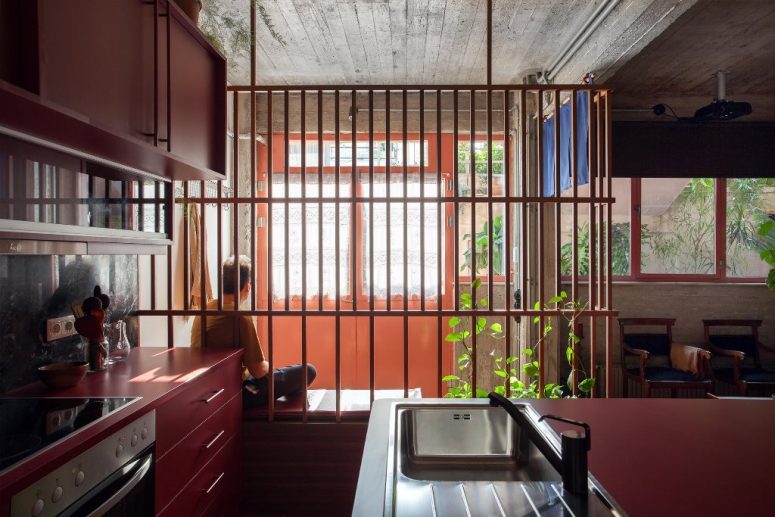 Thanks to windows everywhere the apartment is filled with natural light

The floor is done with rust-colored tiles, you may potted plants, cacti and succulents that refresh the interior 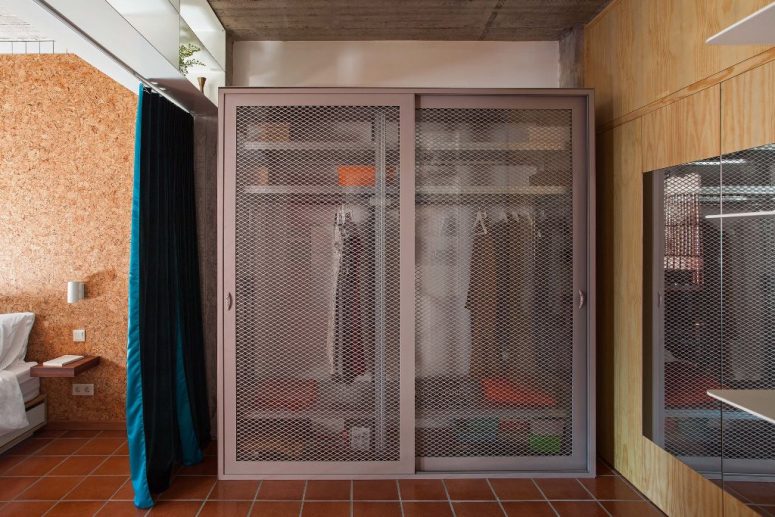 The wardrobe is industrial, with wire doors that are slightly sheer 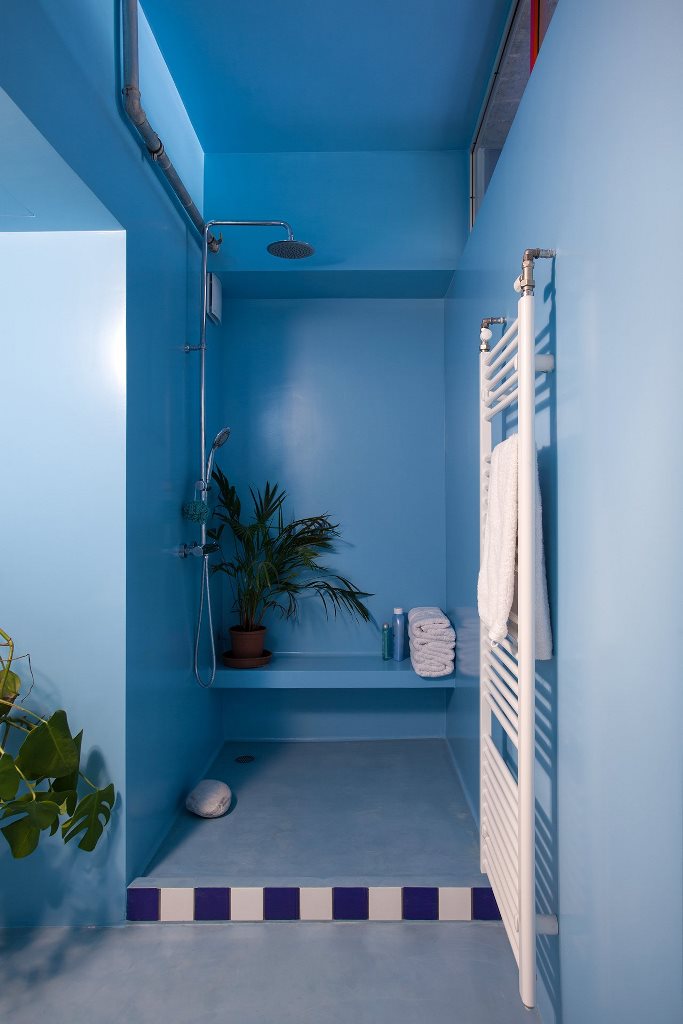 The bathroom is done in light and power blue, with a zoy shower nook and some bright tiles

You know what is scarier than that 5′ spider? The “holiday extreme” version of me because I’m going to decorate for ANY holiday this year. This is only “stage one” because the month is long and I am desperate to stretch it all out and have any excuse to decorate, craft, and DIY with the...

Welcome back to another post here on Styled By Sara Tramp. Might as well change the name, since this is my THIRD time on the blog this week. Didn’t I stop working here at the end of August? I am, OF COURSE, joking. I just happened to be working on three different posts that all...